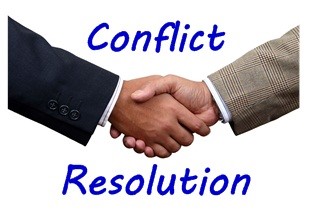 The Three Types of Difficult Conversations

To make the task of giving feedback and addressing conflict less daunting, we break down difficult conversations into three separate conversations:

The “What happened?” conversation.

Your discussion of the substance of a conflict – what each party perceives got them to this point – should be aimed at separating impact from intention. If one employee complains that another employee demeaned him, it is important to find out the intention of the person who is being accused. We often jump to false conclusions about others’ intentions.

Emotions play a strong role in conflicts. Wise business negotiators give disputants plenty of space to explain how they are feeling. You can do so effectively by engaging in active listening, which involves paraphrasing what the other person has said as accurately as possible, asking open-ended questions aimed at revealing the other person’s motivations and interests, and acknowledging the other person’s emotions and concerns.

The “identity” conversation. Our deepest concerns about our identity often can be found at the root of our conflicts of others. Such identity concerns include questions about whether we are competent, respected, and ethical. Consider whether the conflict might threaten how the disputants view themselves, then aim to help them maintain a positive self-image as you offer suggestions for improvement.

Honest and useful feedback can be just as difficult to accept as it is to deliver, write two of the authors of Difficult Conversations, Douglas Stone and Sheila Heen, in their new book, Thanks for the Feedback: The Science and Art of Receiving Feedback Well (Portfolio Penguin, 2014).

Our own personal negotiation and dispute resolution “blind spots” – such as a bad temper or extreme sensitivity – can prevent us from being open to feedback and resolving conflict. To overcome our blind spots and move forward, we must consider the possibility that others have identified something about us that we ourselves cannot see. Ask for clarification and patience as you work on learning more about your blind spots and trying to do better at conflict management.

How Leaders can Facilitate Conflict Resolution

Conflict at work can either fuel or disrupt the momentum of an organization. When teams are working in a hectic and tense environment, it gives rise to disagreements and unnecessary arguments.

Managing conflict can become challenging, especially for leaders who are not familiar with the intricacies of daily operations and the concerns of the team members involved.

Even a trivial issue can create a ruckus if it is not handled at the right time and in the right manner. It becomes the responsibility of leaders in such crucial times to take effective steps to prevent conflicts.

“A true leader should assess conflict situations correctly and handle them carefully so that healthy team tension doesn’t turn into disruptive chaos.”

Sadly, many leaders prefer to avoid tense situations and insist on maintaining a fake harmonious environment. This helps enhance their popularity in the workplace initially. However, what they do not realize is that this eventually leads to further build-up of negativity and internal disruption amongst team members.

A leader must try to actively neutralize or minimize such difficult situations so that they do not get out of hand. When leaders help resolve conflicts, it strengthens the trust within the team. Employees are then better able to optimize their output and efficiency for the growth of the organization.

How to Deal with Conflict

It is a leader’s responsibility to create and sustain the workplace momentum, engage employees in healthy discussions, and handle conflicts delicately. To help with this process, the following will help:

Most conflicts occur due to differences in understanding. Timing is of utmost importance in such situations. A leader should assess these misunderstandings and facilitate a healthy discussion in an open environment to avoid the escalation of the conflict.

It is also essential for leaders to act when there is definite proof of an employee’s track record of wrongdoings that have been adversely affecting the morale of the team.

Employees look up to leaders to intervene and take effective steps. If they know you are aware of their concerns and are not acting upon them, you will lose their trust. Timely action in confronting the issues is a must for every leader. If you hesitate while deciding, your reputation will suffer along with the progress of the organization.

2. Do not Overstep Boundaries

Coaching your team and learning about them is essential while dealing with and resolving conflicts. This will help you understand the limitations and boundaries of your employees. As a leader, you must understand the risks and rewards of conflict resolution without overstepping the boundaries of each employee.

When you know your team members closely and understand their expectations, you can openly communicate with them about their drawbacks in the workplace.

Once you have identified behavioral tendencies that trigger such conflicts, you can create awareness to their behavior sensitively. This can be better accomplished with open interactive sessions where you set precedence and reinforce performance expectations for every team member. This will help them become more aware and actively prevent any conflicts from arising.

Leaders should seldom pull rank and authority while handling conflicts in the workplace. The authoritarian approach to conflict resolution does not resolve anything. Instead, it fuels internal negativity amongst employees.

As a leader, you should respect the unique differences in people and try to understand their individual viewpoints before arriving at any conclusion.

Conflict resolution is not simply black and white. There are grey areas in the workplace that have gained prominence with rising cultural and generational diversity.

As you understand your employees better, you can not only avoid the conflicts but also resolve these conflicts (if they arise) by bringing everyone on the same page through effective open communication. This will help you as a leader retain the trust of teams and enable them to value when guidance is needed during conflicts.

Leadership is not a popularity contest. As a leader, you will have to confront tension in the workplace and sometimes make decisions that might not be well received. Conflicts give rise to heightened emotions that make the workplace more difficult. That is why it is important to address such situations at the earliest stage before they spiral out of control.

Conflict resolution is quite like other challenging decisions that you make in the organization. You must trust your gut and wisdom to make the right decision. Waiting and hesitating makes things only worse and complicated.

See conflict resolution as an opportunity to enable an open and healthier environment in the workplace.

“A true leader understands that facing difficult situations together with the team strengthens trust and builds authentic relationships.”

Conflict resolution is not only an opportunity for professional growth for employees but also an opportunity to improve the maturity level of your leadership.

The most difficult requirement of leadership is effectively managing conflict. Whether you have had training or not, when you mismanage conflict, you put your company in jeopardy.

In the US government’s 2020 fiscal year, there were 67,448 workplace discrimination charged, resulting in $106 million in damages through litigation. This does not damages granted by state and district courts. Separately, a 2015 analysis found that the average cost to a small or medium-sized company for defense and settlement was $125,000, with the average case taking nearly 10 months to resolve itself.

Company costs aside, the personal cost to you could be your job. By the time attorneys get involved, the path of least resistance is to fire you. Here are three rules to make sure you do not mismanage conflict.

Rule No. 1: No blindsides

A common problem I see is when a manager does not let his or her boss know about the conflicts brewing in the department. The midlevel manager keeps “moving the chess pieces,” — i.e., shuffling time schedules or moving high-conflict employees to different departments, making promises or unprincipled deals to keep the complainer quiet and avoid looking incompetent to their superior.

But the effects of being blindsided are more significant than a little embarrassment. Once a disgruntled (and ignored) employee files a complaint with the Equal Employment Opportunity Commission, things get messy. I can guarantee that blame rolls downhill. When you are in over your head, it is tempting to keep your problems to yourself and try to negotiate deals with employees but that is the worst thing you can do.

What to do: Go to your boss and fess up. Ask for coaching and advice. Make sure you have documented all the strategies you have tried so far. Own your mistakes, no matter what they are, and ask for help — not just for protecting yourself but also for the organization.

Let us face it, conflict does not feel good, and we tend to avoid situations that make us feel bad. But every time you avoid a difficult conversation, you wire your brain to avoid it. Then you lose trust in yourself and respect from your employees.

Many avoiders know they are conflict-averse, but many appeasers just think they are “being nice” Appeasers make promises they will not keep. They agree outwardly when inwardly they disagree.

Then there are the aggressors. Aggressors retaliate, and say things like, “I didn’t ask you to work here.” Often those who are aggressive think they are good at addressing conflict. They brag and say things like, “The buck stops here.” What they really mean is that they know how to avoid real conversations without it being called avoidance.

The point is, they are every bit as uncomfortable with conflict as the person who mismanages in other ways. They just have a different method of operation.

What to do instead: Address conflict head-on, without all the emotion of avoidance, appeasing or aggression. Clearly identify the situation by answering the question: What is happening that should not be happening? Once you have answered that question, now you can identify the key players involved, and how the issue affects the business.

Keep it professional and keep the emotions at bay so you do not have to avoid, appease, or use aggression to address the issue.

Rule No. 3: Understand your culture

If you were hired to “right the ship,” but the senior leaders have a habit of avoiding, you are eventually going to be the scapegoat. One reason senior executives complain about having to micromanage their managers is that they override those managers’ decisions.

As a result, managers are afraid to make decisions that make them look incompetent. There could be an ineffective policy manual or a lack of a clear decision-making process. Or the senior managers are conflict-averse, and they struggle to support a manager who is willing to discipline and go by the books.

No matter how willing and skilled a middle manager is with conflict management if the upper level is conflict-averse, they will not be a fit for the organization, and their efforts will be thwarted.

What to do: Before deciding where you must discipline or course-correct, discuss with your upper level, and be prepared to show where your decision aligns with the company values and policy manual. Get verbal support before acting. If you see a history of avoidance, you have some tough decisions to make about how to address the core issue. Do not be deceived. No matter what you were told when you were hired, you will not change the culture without support at the top.

Conflict is not necessarily detrimental to an organization, but mismanagement is. With the right cultural support, some skills, and a few guiding rules, conflict can be a catalyst for collaboration and leadership growth.